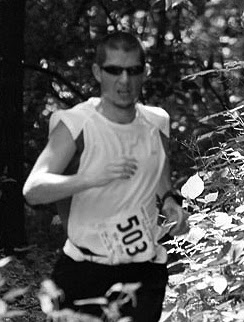 First up a photo - this one from last month's Smith's Challenge 10k - that 6.2 mile romp in the woods, where I finished 38th out of 148th. The "official photo" is blurry, so I've tweaked it in Photoshop. However, I did not straighten my number. Half of the race number was ripped off when climbing a fallen tree and I ran the rest of the race with it basically tucked into my race belt.

Anywho, while we're on running, June ended well - 130 miles, my best month by 30 miles. There were long runs, interval workouts and I ended the month healthy. All good things, since my marathon program begins in four short weeks. Yesterday also saw a 12 mile run, 8 of them on trails, and the whole thing was very relaxed and easy, yet at almost the same pace as my half marathon just 8 months ago. So all in all, everything is good. I've got a 5 mile race on Wed., and hoping to run a much smarter, faster time than what I went through at the Red Rose.

In other news, Floyd Landis came home to Lancaster. I went to the book signing, got the book but wimped out on the looooong line. I didn't need his autograph and -judging by the crowd- he didn't need my moral support, which was great to see.

As far as the book itself, here are my observations:

1.) It's a great read. Even if there were no doping mess, this would've made an awesome memoir. Funny and insightful. Really great stuff.

2.) I'm guilty of being a naive person. Even so, after reading this book, I am shocked at how bad the USADA is... It's a crime really and while I always *felt* Floyd was innocent, this book sealed it for me.

3.) Floyd wasn't flawless in his post-Tour handling of the situation and in most of the book he admits his gaffes. One he didn't admit, though, was the mistake in hiring Will Geoghegan as his business manager. While the book does a great job of explaining how close Will and Floyd are, the fact is that Will was hired as "business manager" only after the doping crisis began and - judging by what we learn about him in the book - he wasn't really qualified for the gig. I came out of this understanding why Floyd would definitely want Will as a friend, but utterly befuddled why he hired him for this sensitive position at a very sensitive time.

4.) Axel Merckx is my new favorite domestique. If you really study the cycling parts of the book, you realize how professional and talented Axel is. He's kind of like the guy in the movie with only three scenes that performs flawlessly in all of them.

5.) A couple great quotes about training -- the difference between over-training and under-resting. They brought to mind last year's great article in Outside.

Now then, I'm no reporter but my friend John Finger is. Check out his interview and full coverage on Floyd's visit to Lancaster.

Which bring us to baseball, because that's something else John covers. We learn that - two weeks before the All-Star break - the Phillies are closing in on another record besides their much-reported 10,000th loss. If they use just two more pitchers this year, they'll set a new club record for number of hurlers in a season. Like the 10,oooth loss, this isn't a good sign.

And finally, because this blog entry is already all over the place, Alberto Salazar was hospitalized with a serious heart event. Here's hoping he pulls through.