Showing posts from August, 2008
Show all

August 27, 2008
For the past couple of weeks, I'd been feeling a bit cocky about my marathon plan. I'm up to 45ish miles per week, and the long runs are getting faster each time. I had zero - ZERO - pain. Good stuff. But then I started to worry because my plan still doesn't have speed work for 3 more weeks. While this will give me 8 weeks of speedwork, it didn't seem like enough (considering I did FIRST last year, which had 16 speed workouts, nevermind the fact that I failed at MANY of them). So I did 6 800's today w/ 90 second rests. The fastest was 3:08. The slowest was 3:10. And now - like a good marathoner-in-training, I hurt. Everywhere. And I need a nap. And I'm already dreading my next speed workout. Good news? Weekend after next, I'm running a half marathon, so next week will be a mini-taper/cutback week. Gee - I guess I won't be able to fit the speedwork in. :)
2 comments
Read more

Two Sides to the US Team Running @ the Olympics...

August 25, 2008
The negative : Dropping a baton isn't bad luck, it's bad execution. Responsibility for the relay debacle lies with many people and many groups, from administration to coaches to athletes. That's why, when these Games are completed, we will conduct a comprehensive review of all our programs. It will include assessments from inside and outside the USATF family, and included in the assessment will be the way in which we select, train and coach our relays. BTW -- the fact that the USATF has a blog is cool. The fact that there is no feed is not. The positive : My Olympics four years ago when I had to drop out of the 10,000 doesn't compare to this at all. I carried that memory with me for four years. Dropping out was never an option today. If I had to sit on the side of the road and drink my bottles until I could get going again, that's what I would have done. I wasn't going to drop out again. Now there are more Olympics ahead for me, I hope. I've got to just
Post a Comment
Read more 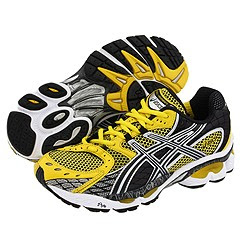 To thank me for coaching her to her first 5k (this weekend), the wife got me a pair of Nimbus 10's. Since my current pair had 280 miles on them, timing was perfect, as I go through the outsole in under 300 miles. But here's the cool part: she ordered the just-released bright yellow and black color. I friggin' love them.
3 comments
Read more

August 21, 2008
Check it out, yo: I work for one of the fastest growing companies in the US . Even better: there's a shower so I can run over lunch there.
Post a Comment
Read more

August 20, 2008
As always, when there's a lot to write about, I'm too busy to write about it. The two weeks since returning from England have been mondo-busy - work is busy, running takes time and the the wife (and kids) go back to school next week, so the little bits of free time have been full of summer shoving (getting stuff done that we intended to get done two months ago). The marathon training has been going extremely well... 24 hours after returning from England, my buddy Dave and I did a 17 miler together, and we followed that up with our first 20 miler last weekend. In between, I had my finest marathon pace run to date, with 5 miles @ an average of 7:14/mile. The day after that one, I did take an unplanned rest day as my calf was tender, but it healed up perfectly in one day. The marathon pace run was great for me, mentally. My tempos last summer were supposed to be faster than marathon pace, but I struggled with them big-time. I'm encouraged that I'm hitting the marathon p
5 comments
Read more

The Canals of Manchester

August 06, 2008
If you tell somebody in Manchester that you're going to be running in their town, they'll likely tell you to run along the canals. Canals, after all, are filled with water and when people tell other people where to run, they like to tell them to run in places in close proximity to water, be it the ocean, a lake, a river, etc. It's worth noting that because most people don't run, when they tell you where you should run, they're not really telling you where they have run, but rather where they would run if they did run, which they don't. At best, they might have walked where they think you should run, but more likely they've only seen it from a a tram or a car. While these are decent vantage points, there are many things a non-runner won't notice. In the case of the Manchester canals, for instance, a non-runner won't notice the following: *The terrain includes a multitude of cobble-stone and brick pathways. *The parts that aren't cobble-sto
Post a Comment
Read more

August 05, 2008
Commenter Jenny asked about what I wear to run with all of my diabetic supplies... For me, the only choice is RaceReady . Lots of pockets and lots of styles. While not cheap, they're perfect.
Post a Comment
Read more

If You Are Diabetic Flying to England...

August 05, 2008
Don't leave your blood sugar meter on the plane. You'll have to buy one in England and then Google how to convert mml/L to mg/dl. At least, that's what I had to do. While nobody in Manchester seems to have One Touch Ultra Smarts, the concept is similar to how it is in the US: sell the meter cheap and kill you for strips. So, I had a bright idea: I bought 2 meters for 10 pounds each, netting me 20 strips total, enough to get through my trip for only pounds. Sadly, 20 pounds is 40 bucks these days, but it still was cheaper than buying 1 meter and a bottle of strips. One thing that was funny - the local pharmacy asked where I was staying and offered me the option of coming by and having my blood tested there. Why completely unreasonable for a diabetic on a pump, the offer totally cracked me up. :) Running-wise, it's 20 degrees cooler here, which means running when I get home will be brutal, but is wonderful for the time being. Despite the jet jag, I managed six nice mil
Post a Comment
Read more

August 01, 2008
Like a Ryan Howard home run, July is 'outta here. According to the log, I ran 168 miles. In all actuality, it's more like 190, but I don't put the wife's C25k miles in the log. Honestly, I don't know if I should or not. They're about 4 minutes per mile slower than my regular pace, but they are miles. I think of it as kind of doing a poor-man's double. Even at 168, July's my biggest month ever, just nudging out July of 2007. This was due to good mileage on long runs, more mileage on recovery runs and only 2 missed workouts. For August, I'm expecting similar mileage for the month. The long runs will get longer and I hope to boost the recovery runs a bit, too. However, that will be offset by a trip to the UK, which I figure will cost me 2-3 workouts. For that particular week, I'm considering the 3 core workouts to be critical, but will have to go easy on myself for the recovery runs while I adjust to jet-lag and do the work that needs done.
2 comments
Read more
More posts