Showing posts from October, 2006
Show all

October 14, 2006
Well, it took me two weeks to get my foot to heal up well enough to start moving much again.... I got a nice workout on the exercise bike earlier this week (yuck) and was finally able to put together a mostly painless three and a half miles tonight, which means I still have a shot at my next two goals: 1.) Run in Central Park next week when I go to NYC. 2.) Break 40:00 in the White Rose Run 5mi. race in November. However, this injury has reminded me how much I want a road bike so that I can cross train... Ebay, I've got my eyes on you....
Post a Comment
Read more 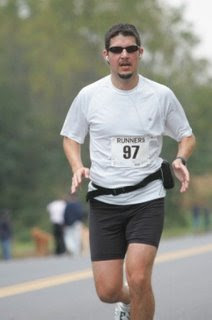 I wasn't sure how long I'd need to recover from last Saturday's half-marathon. On one hand, most reports recommend you take two weeks off running after a full marathon and this was only a half. On the other hand, I've only been doing this for three months, so it's not like I'm in *prime* shape. But other than all the hands was the matter of the foot - the same foot I madly iced in the two days before the race. Five days after the race, it's still quite sore and informed me during a one mile test run last night that the recovery process isn't over. The good news is everything else feels great. Here's hoping another week does it good - I have two upcoming trips to places that would be great to run in, and I'd prefer to do that, rather than hang out on the hotel exercise bikes when I'm there.
2 comments
Read more

Last weekend, I completed my first-ever half-marathon. Here’s one of them blog posts about how it went and how it came to be. Backdrop: On July 3 rd of this year – after 15 years of doing very little exercise – I came back to running again. Working out every other day, I gradually brought my mileage up. By late August, I had my long run up to about 8 miles. I ran a 5k in 26:14. When I plugged that time into my McMillan Calculator , it said that if I were to train for a half marathon right now, I should be able to do it in 2:01. I wondered if I could… more important, I realized that if I continued to add a mile a week to my long run, I’d be up to 13 by the last weekend in September. As fate would have it, there was a half Marathon in my town the same weekend. So, I decided to go for it, with a goal of breaking two hours. The training: Most of September went about as expected, though not without aches and pains. A slightly pulled hamstring in early September after my
2 comments
Read more
More posts