October 02, 2006
Last weekend, I completed my first-ever half-marathon. Here’s one of them blog posts about how it went and how it came to be.

On July 3rd of this year – after 15 years of doing very little exercise – I came back to running again. Working out every other day, I gradually brought my mileage up.
By late August, I had my long run up to about 8 miles. I ran a 5k in 26:14. When I plugged that time into my McMillan Calculator, it said that if I were to train for a half marathon right now, I should be able to do it in 2:01. I wondered if I could… more important, I realized that if I continued to add a mile a week to my long run, I’d be up to 13 by the last weekend in September. As fate would have it, there was a half in my town the same weekend. So, I decided to go for it, with a goal of breaking two hours.
The training:

Most of September went about as expected, though not without aches and pains. A slightly pulled hamstring in early September after my 9 mile run worried me, but it quieted down with some ice and one mostly abbreviated workout. You can view my workout schedule for the month here.

The way things worked out, I’d planned on doing an 11 mile run one weekend, going light the following weekend, and then doing the half-marathon a weekend after that. However, I was concerned about not having done anything longer than 11, so that weekend I did a 12 mile run. I came out of it with a bad blister, which would need to be nursed for nearly a week. In fact, it caused me to skip 1 entire workout.

The week before the run, something in my foot started hurting, causing me to become the Ice Man in the days prior to the race (as well as the Advil Man, the Cream Man and the Worry Man). Fortunately, all of it worked.

My type 1 diabetes doesn’t need much special care for runs less than one hour. For runs more than one hour, there’s a matter of making sure blood sugar is good and that your body is prepared to handle additional carbohydrates.

I’d tested my blood sugar mid-way through my 12 mile training run and found it to be high. I decided not to treat the high blood sugar and not to ingest carbs. Blood sugar wise, that worked: I finished the run with a good blood sugar, but my body was also drained. I decided that if need be, I’d take insulin during the race, just so I could eat the extra carbs.

The race:
Two guys from work raced with me: Jim, one of the owners, was great in the weeks leading up to the race – keeping me motivated and on task. Dave was a surprise late entry – an awesome runner who’d placed well in a trail race the previous weekend. He said he’d help us pace ourselves through the first 10k!
The early race went extremely well. We’d hoped to maintain a 9:00 pace, which would give us a few extra minutes if the mid-course hills wore us down. We actually came through the 5k at an 8:30 pace – a bit quicker than we wanted, but not horribly fast and we all felt good.
Miles four and five looked very bad on the elevation map, but we were fresh enough that they truly didn’t beat us up too bad. I expected worse.
After a very steep descent, we had a little less than a mile to regroup before the big hill. I took this opportunity to do a blood sugar test. Thankfully, Jim and Dave both served as pack mules, because blood sugar tests aren’t easy to do when you’re running.

My blood sugar was 240 – about what I’d expected, since this was a morning run (when my blood sugars run higher) and I’d disconnected my pump. But wanting to take a gel before the hill, I plugged my pump in, took 2.5 units of insulin and ate the gel. I got all my gear packed up just as we hit the bottom of “The Hill.”

The Hill was a bad one, a 170 ft climb over a little more than a mile. The only saving grace was it was steep at the beginning and less so at the end, so it seemed to get easier as we went up it.
We passed through the seven mile mark in sixty one minutes – on pace for about 1:54. While we’d need a good second half, I knew our chances were excellent at this point, as the major hills were over. Dave shook our hand and drove forward, with Jim and I staying back.
Miles seven through ten felt awesome – I was so encouraged that we’d make our goal and I just wanted to keep running a smart steady race and stay on pace. During these miles, we passed about ten people, never getting passed ourselves – a sign that were running a smart race. On some serious down hills around mile eight, Jim dropped off me a bit, but he never went far. In the end, he finished within a minute of me (and ending up cracking the top half of his age group!).
Though my spirits were still fairly high, I hit a tough spot around mile 11. The closest runner in front of me was about 100 meters away, and nobody was coming up behind me. I felt lonely and I was getting tired. Looking at the elevation map now, I can see that the course was also partially to blame as it had turned for its final uphill.

Mile 12 was awful. I wanted so bad for the race to be over and though the runner in front of me (who’d end up winning the 60-69 female division!) stopped every now and then to walk a dozen steps, I just couldn’t get her in. Without anyone around me, I was a little worried I might be blowing up.

But then I came around the last turn and saw the finish area and forgot everything bad. Though I didn’t have much a kick, I tried to come in not looking like I’d need an ambulance.
My wife and kids were near the finish line – both kids holding up “Go Daddy!” signs and my wife with her ever-present digital camera – they were definitely a sight for sore eyes by that point.

Things I learned:
Knowing the elevation map before a race helps immensely.
Running with friends helps immensely – particularly if you need to do a blood sugar test.
Gels work.
The ½ marathon is a fun race without killing you.

The pictures:
The elevation map.

Dave, Jim and I after the race. 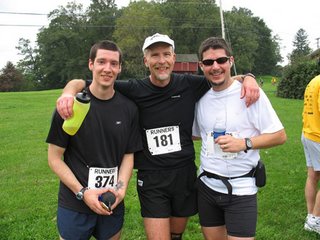