Showing posts from August, 2007
Show all

So much for Aug.

August 27, 2007
Sunday called for an 18 mile run. Going into it, I wasn't really thinking 18 miles, though. I did 20 last weekend and am doing 20 next weekend, and we're still 2 1/2 months away from the marathon. I felt that if I did a long effort on a good trail, it would be close enough. In the end, after several times of logistically trying to figure out how to get there/where to park, etc., I did 13 miles on the highly technical Conestoga trail . Had I known the trail would've been that technical, I probably wouldn't have done it. Monstrous hills, rocky terrain, etc. Don't get me wrong: this would probably be one of the prettiest hikes in Lancaster County, but for a long trail run (some short sections were perfect), this was ugly going. While I'm a little bummed to be that short on mileage, with the elevation and terrain, I still ran my HR @ 140 for more than 2 hours, so I feel like I accomplished much of the goal of the run, without pounding my shins on the road. The tr
Post a Comment
Read more

August 27, 2007
When I got my latest insulin pump last year, I was initially excited to learn that Minimed would be giving me a special blood sugar meter that would transmit results to my insulin pump via wireless. Very cool! Until I learned that the special blood sugar meter was a BD . Simply put, BD (though a medical company since virtually the first caveman boo-boo) has been very late to the blood sugar meter party, and has never brought anything new to the market. BD Meters have the same features now that other meters had five years ago. So I didn't use the BD and don't use the wireless signal. Moreover, I wasn't a bit shocked when BD announced last year it was exiting the blood sugar meter business . Now Medtronic has figured out that if you want to look cutting edge, you should have cutting edge partners. The next meter to send wireless signals to the insulin pump will be a Lifescane One Touch , like it should've been from the beginning. There are plenty of good meters out ther
1 comment
Read more

August 24, 2007
With a bad head cold this week, I followed through on my plan to replace Wednesday's track workout with an easy paced 8.5 mile run. Just what the doctor ordered and coupled with some extra sleep this week, my cold is safely in the rearview. My cross training workout yesterday was on the elliptical. Incidentally, the FIRST program doesn't recommend using ellipticals, as this doesn't give running muscles much of a rest. However, I had to work at home a few days this week and my bike was at the office, so..... Anywho, today's plan called for a tempo run, and once again the FIRST's tempo plan kicked me in the tail. Despite handily completing their long runs and mostly succeeding on their interval workouts, I totally screwed up the tempo workout. The plan called for 3 tempo miles (in the middle of 3 easy miles) at 6:45 pace. I decided to go for 7:00, knowing the troubles I've been having on this workout. I hit the first mile, but mid-way into the second felt the w
Post a Comment
Read more

August 22, 2007
Nah, sidelined is pushing it, but I do have a pretty good headcold, and have pretty much elected not to do my interval workout today. Recovery after my first 20 mile run on Sunday has gone actually better than expected. I was sore Monday, and cross-trained last night on the elliptical. Today, my legs actually feel pretty good, but my head is wicked stuffed up. Right now, I'm thinking an easy 6-8 miles this pm will be about right. I'm off today on vacation. Ironically, had I known I'd be sick, I would've made it a sick day. Oh well... More interesting: I picked up the book that goes into great detail about the FIRST plan I'm following for my marathon. While I'm not following the plan perfectly, it's the one that I'm closest to and one that I'm very interested in from a philosophic standpoint... I'll post mini-reviews and insights as they come.
Post a Comment
Read more

That's One Small Step for the Web...

August 22, 2007
Every now and then I have an idea that I think is pretty good, technology-wise. I'm not silly enough to think these ideas will make me rich. After all, as a good friend says, it's always about the execution. More importantly, I've found in the previous few years that if I have a good idea, somebody smarter than me has it, too and if I'm patient, the technology will appear sooner or later. One of those moments was yesterday. A few months ago, Google announced their new "My Maps" feature which makes it easy to draw and label your own maps, without the Google API key. If you're not a geek, working with the API key is a bit of a chore. I know this because I'm not a geek. Anywho, the one problem with the new My Maps feature was that your resulting map still couldn't be put on another web page (like this blog for instance) without the API key. So you can have a cool map, but it basically stood by itself, unless you're a web geek. Yesterday, Goog
Post a Comment
Read more

August 19, 2007
Very peculiar week in the rearview. The first half of the week was mighty disappointing... 2 fine days of cross training led to a speed workout on Wed., but I wasn't nearly recovered enough for it, as evidenced by a 147 HR... on my warm-up (!)... Not a good sign, and I abandoned the work-out at the mid-point. Followed that up with a 6.5 mile trail run Thurs.. the trails were good for my legs and I felt some better, by my HR was still elevated a bit. Friday showed more gradual improvement, and I sandwiched 3 miles of tempo inside a 6 mi. run, though I'm being generous by calling it a tempo... the fast miles were only about 7:40-7:45.. just didn't have energy back yet, but I still felt like I was *getting there*. Yesterday was a rest day. Today was my first 20 mile run ever, completed on a newly renovated rail-to-trail.. no hills, you see, are a great way to cheat a 20 miler. Originally, I planned to go 8:30 for the first ten and 8:15 for the second ten. The first ten w
1 comment
Read more 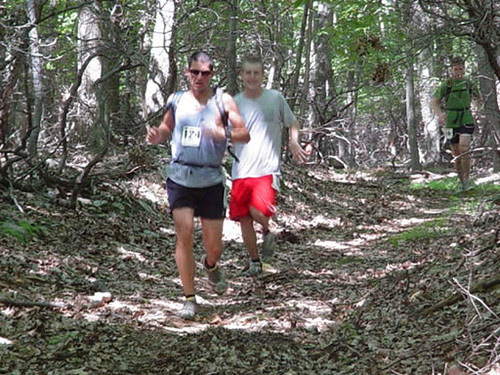 Here's a pic of me 10 miles into the Half-Wit Half-Marathon. I am not this blurry in real life.
2 comments
Read more

Them Trail Dudes Can Fly....

August 14, 2007
Further proof that a. I've got lots of room to improve on the trails and b. Casual runners don't roll out of bed and try races like the Half-Wit Half Marathon. Results have been posted . Overall, I came in 134th/470 - Top 29%. In my Age-Group, I came in 40/85 - Top 47%. Compare this to my last road race, when I was Top 14% overall and - well - it's pretty bad. Here are a few other comparisons: Smith's Challenge 10k trail run (in June): 26% overall. Ugly Muddler Trail Run (in Feb.): 42% in my age group, 29% overall. In other words, about the same. However, this was only my second half-marathon, and while I was in much worse shape during that race, there is at least that good news: In that race, I finished in the 55th percentile overall, and in the 64th percentile in my age group. In other words, I've passed half the pack that was ahead of me this time last year, and 1/3 of the men in my age group that were ahead of me. But does that bode well for Harrisburg ?
Post a Comment
Read more

Of Running and Not Blogging...

August 13, 2007
Well, as evidenced by my week of non-blogging, I was on vacation. 1 week of sun, sand, sat, wave runners, boats, funnel cakes and not a wireless internet connection to speak of. But there was running. The day after we got to Ocean City, I did 16 miles on the pancake flat Coastal Highway of OC, MD. Longest run ever. Flattest run ever. At home, Monday would've been a cycling day. I was on vacation, so I boogie-boarded. At home, Tuesday would've been a cycling day. No bike, so I did a 5 mile run, easy pace. Wed. was a brutal pyramid workout at 7am, to avoid the heat that would eventually go to 100. I did a 1200, 1000, 800, 600, 400 and 200. The first two and last two were under goal pace. The 800 was a smidge over and the 600 was way over, but I never could figure out how to pace a 600. At home, Thursday would've been a cycling day. On vacation, it was a rest day. Friday was supposed to be a 7 mile tempo run, but I made it an easy paced run, because after Saturday's
1 comment
Read more

August 01, 2007
A little review of July: Total miles: 158.8 - my most since I came back to running 13 months ago. That's 21% more than June (which had been a 30% up-tick from May). However, there were also a few cross-training days in the month, too. It's a decent number - certainly more than some of the blogs I read and certainly way less than other blogs I read. Three runs of 12 miles or more. That's definitely the highlight of the month as I move into Marathon season. Six trails runs - this did a lot to keep me healthy. Speed work was comprised of two good interval workouts and two races. These all went well. There were also three tempo runs. I'd say 1 of these was excellent, 1 was fair and 1 sucked. This is my weakness right now. Two races: a five mile run with a PR that I felt OK about and 1 mile time trial that had nice results, all in all. During the month, I trained with Clif Recovery , Accelerade and Ultima Replenisher electrolyte replacement drink. I was unimpressed
1 comment
Read more
More posts