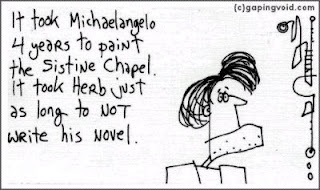 I've been thinking more of writing lately. Or rather, not writing.

Since a rather prolific period from 2000-2004, I've written very little fiction. Ok, no fiction.

It doesn't bother me, much. I've replaced that particular hobby/vice with a healthier one, and an arguably more objective one. In writing, one man's trash is another man's treasure. In running, a five-minute mile is a five-minute mile. Rinse and repeat.

Recently, when we were cleaning out the basement, I stumbled across the anthology I was published in, alongside my certificate for the 2004 Central Pennsylvania Writing Award. I looked at these stories and they were almost like they were written by someone else, which I guess they kind of were.

This isn't one of those drama-clad "It's time to start writing!" posts. I hate those, much as I hate first-day-of-training-plan-posts and first-day-of-diet-posts. Fact is, runners run, writers write and dieters don't eat. They do these things, rather than talk about their intentions to do them.

But I am wondering if I could find the time to do both. And if I could, would I?

*Like many cool cartoons, the above came from Hugh.