Never Trust a CEO With a Book in His Hand 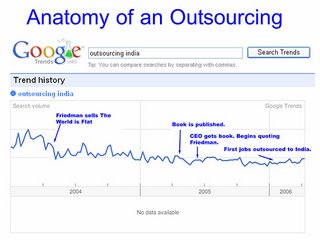 The following story is true. Names have been removed because – frankly – they have more lawyers than I do.

In late ’03 and early ’04, “outsourcing” was all the rage. Companies, particularly those still trying to shake the dot-com blues, sent lots of work overseas, hopeful that the promises of all the brilliance at a quarter of the price would be fulfilled.

In April of ’04, noted writer Thomas Friedman signed a contract with Random House to write, “The World is Flat,” a nonfiction piece which said – in several hundred pages – that virtually everything could be outsourced, quality would not suffer, and corporations would have higher profits.

Or at least, it would say that, but not until it was published nearly one year later in April of ’05. By that time, judging by the Google Trend chart, smart corporations had finally learned the truth – while some stuff could be outsourced, it wasn’t really that easy to replace overpaid American workers, for many reasons (good and bad), which I won’t get into here.

Problem was, when a CEO of a $2billion dollar company saw the book in stores in mid-’05, he assumed that since it was new, it was current. And while not all CEOs are hard-headed, this one was. He started quoting Friedman liberally (this is how I found out about this story, as executives in the company asked me what the book was all about) and soon after made speeches saying the company had to outsource to get up with the times. Ironic, since this was the time that many firms were scaling back on outsourcing, or at least realizing that the opportunity wasn’t as great as was suggested.

In January of ’06, the company officially shipped its first work to India, eliminating several hundred jobs along the way.

At lunch two weeks ago, a few of the executives told me that the company was learning that this outsourcing stuff really wasn’t going that well and while certain functions would probably be eventually handled in India, the quality of the work wasn’t up to par and the time to get it there (since competitors won’t wait for you to figure it out) was prohibitive, too.

What’s my point in all this? Only that when it comes to contemporary business theory, book lover that I am, I stay away from the bookstores. It takes most publishers more than a year to get a book on the shelves; a year during which an entire business tide can turn.