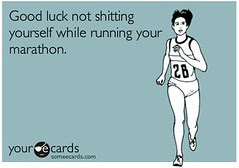 Well, this thing's overdue. Heck, I'm almost not sore now. In fact, I was 80% unsore yesterday and wore one of those detox patches on the bottom of my foot last night, and today I'm feeling near perfect. Yesterday, I even wobbled two miles. But still, there's a story to tell...

When I got to Harrisburg, the forecast was good... low 50's and "breezy." Not too shabby. The plan was to go out @ 7:15 pace until the wheels fell off. However, let's recap how I came to that decision:

Before the race started, I bumped into Marc Buckwalter's wife... Marc was the fellow who I'd done my best 20 miler with a few weeks prior, and he's decided to take it easy for this race to spare his winter racing season. "Taking it easy" for him meant 3:10, so I had a bonafide pace group on my hands. In fact, here we are early on:

Now the problem I tend to have is that if I set a goal of 7:15, I want those miles to be under 7:15. So they were. In fact, ran the first six miles @ 7:12 pace. And when we turned into a stiff "breeze," I kept up that pace (though did duck behind Marc as much as possible). Marc kept a steady pace, and I played a game of let him go and catch him again.

About this time, Marc asked me how I was feeling and I admitted I didn't feel as good as I'd hoped. Last year on this course, I started feeling bad around 17 miles. This year, I was starting to worry at 14. At about the 15 mile Marc, though, he pulled away for good, as this pic shows: 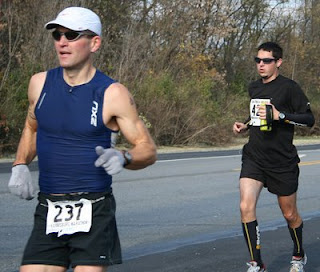 Soon after, my pace started to falter. I mean really falt

er. It got ugly and uglier and when the tutu guy passed me, I knew that my hopes for a 3:15 were gone.

The last six miles were awful (no surprise) and I considered quitting many many times, but knew that I'd have some sense of pride if I finished. So I did and I do. Exactly five minutes slower than last year - eight minutes out of Boston.

The day after the race someone asked me how it went and I said I did some stuff wrong. They said, "What stuff?" I said, "All of it." In no particular order:

So that's that... DON'T read this and think I'm depressed... one of the things I do love is analyzing the successes and failures and learning from them, and I learned a ton this time around.

Special thank to Bill Hathaway for the pics, Dave Gordon for training w/ me for four months, father in law Steve Gingrich for flawlessly executing three bottle switches, Marc Buckwalter (who finished in exactly 3:10) for setting the pace, all of you who read the blog and especially the wife and kids for putting up w/ me.