Damn You, Global Warming! Or, My Cleveland Marathon Race Report

May 22, 2012
After running the Boston Marathon together last month, Ben Semeyn and I found ourselves together again, this time in Cleveland. As Ben moves his focus to triathlons, he was signed up for the half marathon. For my part, I decided to add another full to my resume. My plan for a PR in Boston had been derailed by record heat and though I knew I wasn't complely recovered, i hoped the marathon gods might smile on me a little in Ohio.

Race day morning came early and I woke up with a blood sugar of 120, which i considered perfect since I wasn't planning on eating for some time. Ben was in the 60's, which was where he spent quite a bit of the weekend. In fact, we joked that he had given me some more of "his" diabetes because he tended to out-low me on every test through our time together.

Ben, intent on putting together a fast half marathon did just that, finishing in 1:24, 4th place in his age group, and in the top 1% of his age group.

The weather at Cleveland, however, made it difficult for many marathoners to have stellar performances. My goal had been two-fold; finish in 3:15 and in the top 10% of my age group, which is usually the same thing on a good marathon weather day.

I lined up with the 3:15 group and ran with them until a surprise, sudden downhill and uphill around mile 10. I kept them in my sights past the half marathon, though, and went through the 14 mile mark only about 48 seconds behind them. How do I know this? Because the local news recorded all of the runners going past the 14 mile mark. I'm bopping by here at about the fifty second mark. And my wife is right: I do run like C3PO. To see me "in action, go here, scroll to the 8:51-9:01am video and watch for 50 seconds (after the 15 second commercial).

At any rate, shortly thereafter the crowds thinned noticeably. It appears everyone in Cleveland with friends was running the half marathon. Even still, when I went through the 21 mile mark, I was on pace for a 3:20 finish. But at that point, the race route turned north for the final five miles, the sun went higher in the sky and the slight breeze that had been in my face went to my back. And my pace began to suffer, big time.

I finished in 3:27, which I was less bothered about when I learned it put me at the 11th percentile in age group and under 10% for the entire field. So while I was slower than I wanted, so were a lot of other people, and there was little I could do about it but complain about global warming. I also was somewhat bummed to have a blood sugar of 231 after the race. While not completely horrible, I've made it a habit of finishing with awesome blood sugars in most of my past marathons, and the elevated blood sugar certainly contributed to my slowing.

Last year, Ben and I had enjoyed the NJ Ultra fest together. After finishing in 2nd place in the marathon, he had come out and joined me for a portion of my 6th place finish in the 50 mile race. That had been one of the highlights of the race for me, having company just when things were getting tough. Ben repeated the gesture in Cleveland, coming back out on the course after his half and running the final three miles of the marathon with me. I'd like to think he made the "wall" I'd hit a little shorter.

The following day, we joined our local Sanofi rep, Kyra Gross. Kyra is tasked with promoting the IBGStar, so we first joined her visiting 2 doctor's offices. As Ben and I are both genuinely excited about this new meter, it was easy for us to show our enthusiasm, which was only greater when we stopped at a local Apple store and saw the products on the shelves. 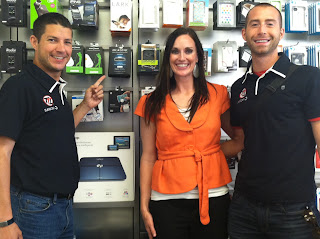 We concluded the day with a gathering of runners whom had competed in Cleveland while raising money for JDRF. All had a connection to type 1 diabetes, including one diabetic who had completed her first marathon. Being able to share a little bit of the Team Tupe 1 story with them while learning of their own experiences was the icing on the cake of what was a wonderful experience in Cleveland for both Ben and myself.