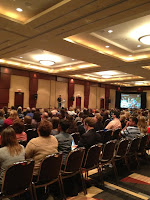 I was fortunate to speak at a joint event held by the JDRF of Eastern PA and the Children’s’ hospital of Pennsylvania this past weekend. More than 300 people attended, a wide mixture of children and adults, all touched by Type 1 diabetes in one way or another.

The morning program began with a presentation by Dr. Aaron Kowalski, who oversees the Artificial Pancreas Project. Learning about recent progress of the project was exciting, and the audience was happy to learn of updates currently coming down the pipeline.

Next up was a short break engaging with vendors. I was happy to chat with the Sanofi reps and see the forthcoming IBGstar, the blood sugar meter that plugs into an iPhone. It’s hard to imagine any diabetic iPhone fan not picking up this meter as soon as it becomes available.

I was the next presenter to take the stage. I began by sharing the latest Team Type 1 video, which was greeted with a resounding applause. As I joked after the video, the only problem with it is maintaining the excitement that it creates.

But in truth, I have a lot of fun telling stories about my teammates. I talked about Matt Patrick's ability to run similar marathon times since his diagnosis as he had prior to it, Sebastian Sasseville's ascent of Mount Everest, and Morgan Patton's journey from a teen who didn’t care enough about her blood sugar into an elite cyclist and awesome rep of everything Team Type 1 embodies.

After a short lunch break, the conference reconvened with breakout sessions. Along with CHOP nutritionist, Megan Robinson, I hosted two programs about exercise and diabetes. These fundamental classes address a lot of the basics, such as different types of exercise, but also explore more technical subjects, like the effect of adrenaline on blood sugar.

To say I had a wonderful time would be a massive understatement. I was able to reconnect with Andrew, a brilliant young man who's decided to attend Rutgers in the fall, and Riley, a longboarding enthusiast looking to hold a charity event for diabetes in Philadelphia this year.

But as always, I was also able to make new connections, too. I love meeting other diabetics and learn as much, if not more, from them as hopefully they’re learning from my stories.