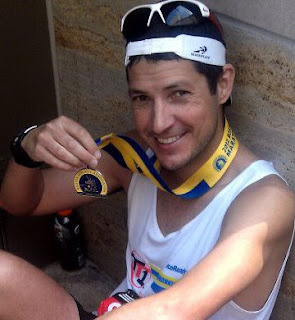 A few weeks before this year’s Boston Marathon, a friend of mine commented that he was proud to have run it last year, during a “record-breaking” day. He was referring to the fact that the course record had been demolished on a day of near-perfect weather. I remarked that he was right to be honored, not even considering that I’d participate in a record-breaking day of another sort.

When the sun came up on marathon Monday, there was no denying that the weathermen had nailed it: we were in for a day of record heat. Though Pennsylvania’s sticky summers mean I can do all right in such conditions, that’s only after weeks of preparation and that wasn’t what we were facing. No, we were faced with an anomaly – a once in a lifetime occurrence that was impossible to prepare for.

My shuttle arrived at the athlete’s village, early, and I found a space in the shade to sit. At this point, the shade was cool and it was almost easy to convince yourself that things would be ok. But as the sun crept higher, it became even more obvious – things would be anything but ok, today.

I met up with Matt, Chris and Ben and we briefly discussed our race strategies. I intended to go out 15 seconds per mile slower than my planned pace, but had no idea if that would be enough. We were definitely in uncharted waters!

Though my blood sugar was a perfect 113 when I woke up, breakfast coupled with adrenaline had me 260 90 minutes prior to the race, so I took a bonus bolus. When I made my way to the starting line, I was down to 135 with my CGM showing double-down arrows. This meant I had an unplanned gel at the start line, but I’d brought 2 extra so I wasn’t worried. Though I usually carry a bg meter for emergencies, that was something else I had to do differently for one specific reason: I knew I would spend the day pouring water over my head and running through sprinklers. No meter that I brought would survive, anyway, so I went without.

Before I knew it, it was time for Mallory, my training partner, and I to head to the start.

For the first five miles, my 15-second cushion seemed to do the trick and I thought I might be able to go with that pace most of the day. By the 8th mile, however, I noticed my heart rate was a bit elevated over my ideal marathon heart rate, so I dialed down the pace a bit more.

When I came through the half-marathon, I was still on PR pace, but if you’ve looked at some of the Boston Marathon splits, you know that everyone’s second half was much different than their first. Though I fared better than many, I wasn’t unaffected and my pace suffered.

Obsessions over my pace were replaced by obsessions over the ice bags and sprinklers that the fans of Boston had all over the course. I’d heard it before and now I know it’s true: these are the best marathon fans in the world. I ran from ice bag to ice bag, through sprinklers and hoses, doing everything possible to keep my core cool. Somewhere around this point I became more interested in ice bags and sprinklers than my training partner's company and she ran ahead (where she'd finish, awesomely).

I ran the hills of Newton, including the famous Heartbreak Hill, because I told myself I’d want to say that I had afterward, but beyond the hills, things continued to go downhill, both literally and figuratively.

In the end, I finished in 3:33, very nearly my slowest marathon, and 15 minutes off my PR. But knowing others were off by much more, I considered myself fortunate. Indeed very fortunate, as my blood sugar at the end was 85. Here are my splits and heartrate, though I started the Polar about the minute before I crossed the line, hence the difference. In end, I came in 16th% overall and 28th% in my AG - not too shabby for the fastest field in the US, outside of the Olympic Marathon trials.

Now when I talk to my friend who’s proud of saying he was part of a record-breaking Boston Marathon, I’ll be able to tell him he’s not the only one.

February 06, 2008
Yesterday, I turned 37 - a nothing birthday. No new age group, no new privileges. Nada. The good news is that it combines my two favorite numbers. My best presents? A copy of Advanced Marathoning and a ten pack of Cliff Recovery Cocoa. That stuff rocks! Over lunch, I stopped by the Home Depot for some salt for the water softener. As is often the case at Home Depot, the line wasn't moving. I turned around to complain to the guy behind me and instantly recognized the old fella in his Tigers cap. "Hey, you're Don Wert !" I said. "Yes I am," he said. And I enjoyed a nice conversation with the former all-star third baseman of the Detroit Tigers. Hey, in Lancaster, PA, that's what passes for celebrity, and when the guy's as pleasant as Don, I'm cool with that. On my birthday, I also bought two URL's. Not sure what I'll do with them, but for now, both www.Type1Runner.com and www.PumpRunner.com will bring you here. These were actually conso
Read more