A Surprising Finish - a Change of Plans 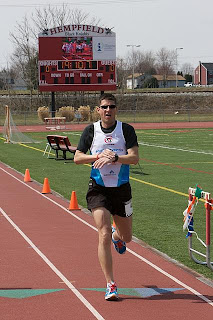 Three weeks removed from my 50 miler, I went into a local 5k completely unsure of what would happen. On one hand, I've done more mileage over the past 4 months than ever in my life and most running books will tell you that the simplest secret to getting faster is to run more. On the other hand, aside from the occasional tempo run, I hadn't tried anything resembling speedwork since my last 5k, which was in late November, if memory serves.

And yet, no more than 100 meters into the race, I found myself in 2nd place. There was never any chance I'd win -- last year's returning champ had shown up in better shape and he took off from the gun. But that soon into the race, I realized something interesting could happen.

Rather than rely on my Garmin, I decided less than a quarter of a mile into the race that I had 1 goal: finish in 2nd place. I wasn't sure how that goal would hold up, as I could hear a lot of footsteps behind me. I also decided at that point that my endurance would surely take me to the end; my real goal was to stay fast early in the race so that my competition wouldn't get confident.

I went through the first mile in 6:06 - oddly about where I would've tried to be, had I let myself look at my Garmin. I heard them call out 6:12 to the 3rd place runner. I picked up my pace and gradually heard the footsteps fading away. By the time I hit the 2nd mile, I stole a few glances behind me and judged my lead to be closer to 15 seconds.

This particular course has a gentle downhill 3rd mile, which is fortunate. Running downhill is easy, so long as you concentrate on turnover, which I did. I knew if I held my focus, I'd be fine, and I was.

The surprising finish indicates a different level of fitness than I thought I had at this point, which has caused me to re-evaluate my goals. A 19:11 5k runner who trains for a marathon should be able to run a 3:03 marathon if he's properly trained. While I don't believe I'm capable of a 3:03, that's a pretty good cushion over the 3:20 I need to qualify for Boston, so yes, I'm banging that drum again.

Last night, I learned that Jon Obst, one of the best diabetic ultra runners the world has known and my teammate on the original Team Type 1 Running Team, had passed away. For me and for everyone who knew Jon, the news was heartbreaking. Since I learned about Jon's death, I've been thinking about the stories I knew about him. It would be entirely incorrect to say we were close. Near as I can count, we spent time together on four weekends for races, with a casual Facebook relationship in between and since. But the thing with Jon was, you didn't have to spend much time with him to feel close to him. Before I begin,  I want you to know how good of a runner Jon was. If you look at his results , you'll see that he completed 36 ultra races, finishing 11 of them on the podium. Anyone who has completed a single ultra knows how deep of a well it takes you to compete in such races. Keep in mind, this list doesn't include the races Jon didn't finish and anyone who knows
Read more