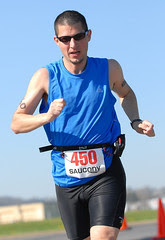 So yesterday was my first triathlon, the Hempfield Tri for Kids Sake – a sprint distance tri… 300 meter swim, followed by 16 mi. bike, followed by a 3 mile run.

As a little re-cap, when I started getting back into shape ten months ago, I did it with the goal of doing tris, thinking that my knees wouldn’t handle just running anymore. But a few interesting things have happened over the past ten months.

1. ) My knees feel great, particularly since getting orthotics five months ago.. My training has been virtually injury-free.

2.) I’ve steadily climbed up the results in my age-group in running races – generally finishing in the top 25-30%. Due to my experiences in high school and college, I know my ceiling is about top 10% - I just didn’t realize how quickly I could get back to that level.

3.) I don’t really like the specificity of tri training – due to time constraints and facility constraints, certain days I have to do certain workouts and – to be frank – that annoys me. I’m happiest when exercise is a break from my structured life.

All that being said, I’ve spent the better part of the past 4 months cross-training, so I decided that I’d hit this triathlon as hard as I can and – in all likelihood – return to a running dominated program for the summer, with the ultimate goal of doing a fall marathon.

Because it was a pool swim (up and back each lane), we were lined up according to our own predicted swim time and set off at 10 second intervals… this meant that we were staggered throughout the race… you were constantly passing people and getting passed but until the final results are posted (they still aren’t) I have no idea where I finished.

I was nervous about the swim because I’d definitely trained less for swimming than any other event… Knowing the swim was only a 300, I knew the difference between a great swim for me and a bad swim for me was 1 minute, so I felt the training time would be spent best elsewhere… I finished the swim in 6:34.. thrilled to be out of the water.

The bike was ok… I’d ridden the course the weekend before and was so glad I did… knew exactly what to expect and the weather was awesome… I passed people and got passed by people, but spent most of the ride trading places with a girl (in running shoes!) who’d end up finishing way high among the women… I joked with her that she’d be deadly with real shoes on and she told me that she was just a runner trying something out… She ended up kicking my butt – that’s for sure. I finished the bike and my transition out of the bike in 58 minutes… really not a great bike time, but a pretty good one for me – I’m just not as strong on the bike as I’d like to be.

Being diabetic, I took five seconds in the transition area to do a blood sugar test… was thrilled to see my diabetes planning had gone well… I’d taken off my insulin pump for the race and had taken a GU 2/3 of the way through the bike… my blood sugar was 146 going into the run with some GU left in me.. perfect for a diabetic heading into a 3 mile race.

I’d read a lot about the bike to run transition being hard but I wasn’t prepared for how weird the first mile would be. I noticed the runners around me looking ridiculous and realized I looked the same way. It was the weirdest first mile of any run I’d ever had and I was convinced I was doing like nine minute miles and had completely blown up… But before I knew it I’d reached the half-way turnaround and realized I actually had a good pace going.

I felt better on the second half of the run and knew I had a chance to reach my stretch goal of 1:30:00 but my muscles were really aching by this point… During the last half mile, I was passed by 1 runner (the only runner to pass me on the run – I passed about five) and I finished in 1:30:09… which I was really pleased with! My run split was 22:15, which last year would’ve been the 4th fastest run. Not sure where it’ll be this year, but either way, it was definitely my strongest event.

The day after a tri feels different than the day after a running race… my legs feel wiped about a running day…. My legs don’t hurt as bad, but my whole body is in moderate pain. Did an easy (8:19/mile) five miler over lunch, though and felt pretty good.

So all in all, a very cool experience… Kudos should definitely go out to the Hempfield Tri Club and some awesome people who helped the race go off smoothly and successfully. And the pic in this post (and likely my main running pic. for some time) comes from Michael Kirk, who did a great job shooting the tri. (He got 3 great pics of me -- this is the one I bought, though.)

Moving into the summer, I’ll probably focus more on running, simply because it will add some simplicity to a relatively complicated life. With a strong summer, I have the potential to nail a fall marathon well enough to qualify for , and that’s a pretty cool goal, I think.

Next up - a race in six days! Just a 5k, but it's special, because: 1.) I'm helping set up for it. 2.) I'm the captain of one of the biggest teams in the race! and 3.) As an approved charity event at work, the set-up earns me an extra vacation day, so - technically - I'm getting paid to run... I'm practically a professional. :)

All of that being said, I’m pretty sure that wasn’t my last triathlon – just maybe the last one this year.