Why I Love The Internet Today - Part I 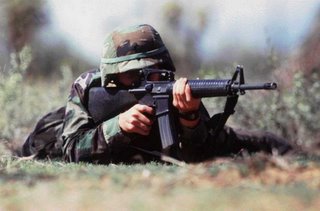 Several weeks ago, I wrote that my best friend from high school - a West Point grad. and current Major in the Army - had been deployed to Iraq.

I received an email from the Major this morning, directly from Baghdad.

In part, the Major wrote:

We should be linked up with our Iraqi Battalion in early January and then it should get interesting...Not sure what to expect of this mission yet.

While I'm thrilled to hear from the Major, I'm doubly thrilled that these brave guys have the ability to maintain some level of contact with the outside world. I find that the older I get, the less I understand this war. But that doesn't diminish in any way the huge amount of respect I have for guys like the Major. Stay safe.