October 21, 2013
After 8ish weeks of diligent cycling and four(!) skills practices, there was no denying it on Saturday morning: it was time for my first cyclocross race.

I arrived at the venue early and looked out at the beautiful course, trying to determine how technical the turns would be. "They don't look bad at all," I thought. "This might go OK."

I went to the registration booth, where the process was flawless. They were expecting me, given that I'd already given them money. I had to give them a bit more for my one day license, but that was expected, too.

There was still a ton of time left but I decided to kit up and ride the course to get a feel for it. And that's when the panic set in.

Despite how the course looked to me from the outside, it turned out that when I see a turn off of my bike, I don't know, yet, how bad I am on the bike. Negotiating the turns, for me, was tricky. Incredibly tricky. Other guys doing warmups flew by me, while I went through turns trying to stay on the right side of the tape. One time I missed. That's right: I broke the tape on the warm-up, on a turn that I would say didn't even look that bad. I committed an offense that could get you DQd from the race... on the warm-up.

I went back to warming up on the road and seriously considered just not racing at all. "It isn't fair to the other racers," I thought. "I don't want to screw up their races. You just need a lot more practice." Excuses. Excuses. Excuses.

It's times like these that I'm very grateful for diabetes, something that doesn't give you the opportunity to quit. Inevitably, when I think something like, "Maybe I won't do this race," I follow it up with, "Great, and maybe you won't take your insulin tomorrow." Seeing how silly the second statement is makes the first statement seem silly, too, and I resolve myself to doing whatever it is I've got planned.

Still, I made the decision that rather than start mid-pack, as my registration number allowed me to, I was going to start last. Very last. As in last man standing. I was going to take this opportunity to learn and observe. When they called my number for lineup, I responded, "No thanks... I'm good right here," which brought chuckles from many in the pack. "I like how you think," one older guy remarked.

Don't believe me? Here's a great pic of the second half of the pack. That's me, lining up at the very rear. 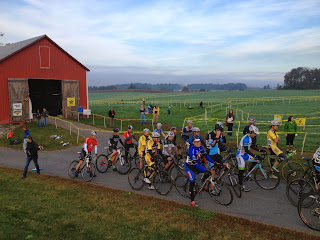 Then we were off and I followed the pack up a short macadam hill before we turned onto the course.

The first lap was dicey for me and I made it a point to concentrate on the turns and focus on staying upright. I did that and made it through the barriers with no problems. (In fact, my skills practice had prepared me quite well for the barriers and run-ups. Every technical problem I faced was when I was on the bike.)

Midway through the first lap, I realized I was actually going to pass someone, which was pretty exciting for me. I waited for a slight uphill and made my move. "I'm not last! I'm not last!" I said to myself and for the first and last time all day stopped paying attention to the course. Within five seconds I had wiped out, taking a bunch of tape with me. "Shit!" I yelled as the guy I'd just passed went by me.

While I heard the emcee call for a tape repair on the upper section of course, I struggled to return to the action before they could DQ me, which I did. A short while later, I passed the first guy again, but made it a point to get too excited for myself.

The end of the first lap brought the first run-up and again, this went better than expected. In fact, after the race, my wife would say, "You ran with your bike very well compared to a lot of them. It's a shame there's not more of that for you."

On the second lap, I found myself closing in on another racer. He was technically a much better than I, but my running fitness meant that when the course was challenging, I was getting closer, but before I could make a move past him, his chain snapped. I felt bad for him, but I also felt bad for me, because once I went by him, I realized that the gap to the next racer was too much to bridge. My passing people was over before it had even really begun.

The second lap also brought with it my second (and worse) crash, when I dismounted on the macadam prior to the run up. My cleat was so muddy that my foot slid out from under me. The impact twisted my brake hood and I had to stop to yank it back into position after the run-up.

Despite the crashes and despite my nerves, the best thing I noticed was what happened to me during the laps. The best part about being a technically horrible rider is how much better you get just from being out there. I had gotten a few emails with technical advice in the days prior to the race, and I said the tips to myself to improve as much as possible By the third lap, I wasn't as intimidated by the turns anymore, and by the fourth lap, I could even agree with those who said it wasn't a technically difficult course. And on all of the laps, I was having fun. In fact, what I think I loved most about racing was how much concentration it took. Unlike running, where I can get distracted by lots of things, every moment during this race was spent living in that moment, which was very cool.

Cyclocross is supposed to be a sport where you're redlining your effort for 40 minutes, but my abilities don't allow for that at this time. On the technical sections of the course, I found myself riding my brakes, not giving much of an effort, and then moving into VOMax intervals where I felt confident in my abilities. But by the last lap, I felt I was closer to doing the sport the way it's meant to be done, and I was getting a bit more gassed. When a friend of mine lapped me, I confirmed with him that this was the end, and I finished as strongly as I could.

My blood sugar at the end was 170. I had made the decision to disconnect my insulin pump prior to the race, so that I wouldn't break it in a crash. While I knew this would raise the BG, I also knew that of all the problems I'd be facing during the race, my blood sugar wouldn't be the major limiter in my performance. I clipped the pump back on after the race and had things down to 100 within a couple of hours.

In the end, I was the last finisher. The guy I'd passed opted to DNF. In addition to the guy who lost his chain when I was close to passing him, there was another mechanical DNF. While I was a little bummed to be the last finisher, truth is I wasn't that disappointed. When you're learning so much and feeling like you're getting so much better, each time, focusing on the negative just seems pointless. I have no reason to believe I can get good at cyclocross, but I have every reason to believe I can continue to get better, so right now, that's the plan.

Part of this grand experiment of mine has been to figure out if I want to be a bicycle rider or racer. They are different disciplines with different challenges and rewards. I'm still not certain where I'll wind up but after I left the race and was driving home, I came across a pack of riders from the local cycling club. I watched in my rearview mirror and noticed they missed a turn that would've delivered them to the cyclocross race. "What a shame," I thought. "They don't know what they're missing." 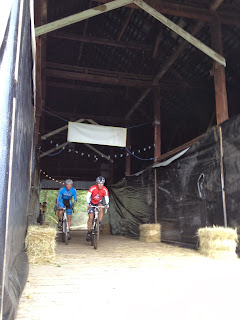