Going into this race, I wasn’t too sure of what to expect. I had never run in Codorus State Park, before. Moreover, the previous weekend had been my only failed workout of this build so far – a scheduled 5-6 hour long run that I pulled the plug on at 4 hours due to a head cold. And just to keep the mystery elevated, I elected to get my flu shot the day before the race. I’ve been getting them for years, and tend to respond fairly well to them, but sniffles and a little fatigue wouldn’t have been unexpected. But rather than stress about these unknowns, I opted to go into the race with a “Let’s just see what happens” approach. Either way, I had to run long this weekend, so why not make it a race?

I woke up at 4am, with a perfect blood sugar of 112. I arrived at the race site an hour before the scheduled 7am start, which meant I got there in pitch blackness. At 6:45, I tested and was 96. I had a Gatorade prime and a PowerGel during the pre-race briefing, and at 7, we were on our way.

On the first loop, I settled in and tried to survey the competition. It was a little difficult, as there were relay teams sprinkled in with the solo runners. I figured I was in about 7th place overall, but guessed that about 2 of the runners in front of me were on relays. More so than the competition, however, ultras are about running your own race. Because this race would be shorter than my 12 hour race 3 weeks prior, I instead aimed to run at a slightly higher heartrate than I had then.

The course for Trails 4 Tails was interesting and couldn't have been better marked (despite the fact that I kept pointing out wrong turns to a guy on the first lap). It began with a couple of miles around a lake. While beautiful, the pitch of the shoreline was really annoying and being the water lover I am, I was surprised how much I came to hate this section! After that, we mostly climbed up through some technical trail for about 2 miles to the ad station. After the aid station was about a mile of road (downhill going out, uphill going back), with a different technical trail loop. Because the second half of the 8 mile loop repeated some ground, this was the best chance to see other runners, which gave us all a psychological boost. I grew to despise the first half of the course and love the second half of it!

My nutrition plan going into the race had been my usual 27g of PowerGel every half hour. Every 8 mile loop, I’d stop to do a blood sugar test. At the first loop, I was 86, so I doubled up on the gels, taking 2 on the hour, and 1 at the half. While I knew my stomach might not like that later, I thought it was important to keep from going low.

While I expected the bonus gel to make me a bit higher, I tested as 96 on the second loop, so I repeated the process. Surprisingly, I was only 84 at the third test and doubled up again.

The fact that my blood sugar was running lower could be attributed to 2 things. First, while the course had a lot of technical trails and hills, none of the hills could be considered overwhelming, and unlike a lot of ultras, I hadn’t been forced to walk until about 28 miles into the race. Secondly, my plan to run the race at a higher heartrate than usual also increased the rate at which I was burning sugar.

As the race progressed, I still wasn’t sure exactly what place I was in. I passed by the the guy I knew was winning several times and I also lapped several runners, but I wasn’t entirely sure about the few guys I thought were between me and the leader. Around mile 28, I passed a solo runner who I knew had been in front of me, so I assumed I was now in 4th place. On the previous lap, I had seen one of the guys in front of me on another part of the course and noted he was walking up a hill. While he was still in front of me, the fact that he was walking and I hadn’t, yet, encouraged me as well.

At my 4th blood sugar test, I was still only 84 and did my final double gel. While they were getting pretty disgusting to eat at this point, I knew the end was in sight. Also, this was the point I picked up my “pacer.”

My niece, Tania, happens to live about 10 minutes from the park and had agreed to join me for the last lap, even though most of her runs are around 5 miles and she’d never ran trails before. I’d coaxed into her into it, saying I expected to be walking a good bit by the last lap.

Having her join me was exactly what I needed to lift my spirits. By this point in the race, my legs were screaming, but it had been several hours since I had the chance to actually speak with another runner, so this was a very welcome distraction.

I knew going into the last lap that we had a decent chance to finish under 7 hours, so I set this as a goal for no other reason than I decided 6 sounded better than 7.

About 2 miles from the finish, I made my only real mistake in the race. I was so tired of eating the sugary gels that I had given myself permission to skip my final one, thinking I could easily get through the last 30 minutes without it. On the last long uphill, however, I knew my blood sugar was getting low. Realizing that the successful day was in danger of going down the tubes, I slugged down one more sickly sweet gel and walked up the final 2 minutes of the hill, letting the sugar do its thing.

Tania and I came through the finish at 6:56. I was exhausted but completely surprised when the race director called my number and said, “There’s our second place runner.” Second place?

While I don’t know when, it turns out that the 2 guys I had been certain were ahead of me had both dropped out at some point.

While I’ve been fortunate enough to be in the top 3 at other races, this was my first podium finish ever in an ultra. While the Trails 4 Tails race is small (race results haven’t been posted, yet, but just 38 runners finished it last year), it’s great confirmation that this has been a successful build as I head into next month’s North Face Endurance Challenge in Atlanta. The field will be far more competitive in Atlanta, and the terrain will be worse, but I can honestly say that I’m as prepared as I can be for it, and that’s really all you can hope for.

Here's a picture where I'm shocked to be getting the silver medal, just a minute after finishing. 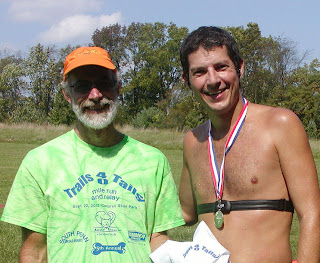 February 06, 2008
Yesterday, I turned 37 - a nothing birthday. No new age group, no new privileges. Nada. The good news is that it combines my two favorite numbers. My best presents? A copy of Advanced Marathoning and a ten pack of Cliff Recovery Cocoa. That stuff rocks! Over lunch, I stopped by the Home Depot for some salt for the water softener. As is often the case at Home Depot, the line wasn't moving. I turned around to complain to the guy behind me and instantly recognized the old fella in his Tigers cap. "Hey, you're Don Wert !" I said. "Yes I am," he said. And I enjoyed a nice conversation with the former all-star third baseman of the Detroit Tigers. Hey, in Lancaster, PA, that's what passes for celebrity, and when the guy's as pleasant as Don, I'm cool with that. On my birthday, I also bought two URL's. Not sure what I'll do with them, but for now, both www.Type1Runner.com and www.PumpRunner.com will bring you here. These were actually conso
Read more