Showing posts from May, 2010
Show all

May 19, 2010
After more than eight years of being on a Medtronic pump, I'm now going through the process of switching to Omnipod. As I haven't started on the Pod, yet, this isn't a review, but rather a post to explain my rationale.

That being said, carrying two devices sucks and I long for the ability to have only 1 receiver. Both Animas and Omnipod announced plans for Dexcom integration and a year ago, scuttlebutt seemed to indicate the Animas would win the race to market. Two weeks ago, however, Omnipod asked the FDA to approve their device, which means they could conceivably beat Animas to the punch.

Along the way, I'd been somewhat curious about the pod. Mor…
Read more 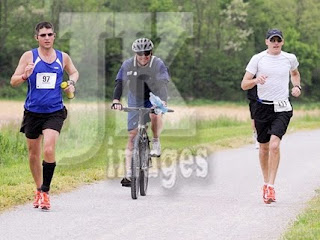 There were about 4 pix taken of me during the Bob Potts Marathon. This is the only one that doesn't look like it was taken in the second trimester, however.

It also cracks me up how the bike rider is grinning like a fool. Though I was appreciative of the many bikers on the course offering gels, etc., this one was like my own personal vulture, slowly going past me, pulling over and waiting for me, repeating the same thing over and over.... for 3 hours. Our conversations were always the same:

This picture was also taken right around the 18 mile mark --- right about where my Boston pace started to go bye-bye.

The guy on the right? Yeah, he beat me, as did most of the people I encountered in the second half of the race. I went out conservatively, but still think that of the runners I saw in the 2nd half, I passed about 30% and the rest passed me.

On Not Qualifying for Boston (Again)

May 17, 2010
Yesterday was my 4th marathon - the Bob Potts Marathon in York, PA. In no particular order, here are notes, quotes and revelations:

1) I finished in 3:26:41, 43rd out of 332ish finishers.
2) I was 5th in my AG out of 27.
3) Out of my 4 marathons, this was my 3rd slowest. However, it was 7 minutes faster than my last marathon, which thrilled me to no end. The very fact that I ran a marathon and didn't get slower than my last is something I've never experienced until now.
4) Though I missed Boston by 5:41, nit-pickers should note that because I've gotten older, it was my second closest call to missing Boston to 2007, when I missed it by 2:57. This is another reason to feel good.
5) Unlike the previous 2 marathons, I had a great day w/ blood sugars. I took a page from the Kris Freeman playbook and boosted my basal rates to compensate for race day adrenaline. This is a gamble move - one that's pretty impossible to practice because when you're in practice, you don't have…
Read more

May 13, 2010
So apparently this has been Diabetes Blog Week, though you couldn't have told it from this site, since I haven't updated in, uh, a while.

I could tell you that I'm not blogging at all, anymore, but that would be a lie. In fact, I'm a professional blogger of sorts, and that particular blog continues to see 3-5 posts per week. So maybe that's my excuse - posting over here is kind of like asking the mailman to take a walk.

Truth is, I have been busier than I'd like of late, but that's a crap excuse, too. We all get 24 hours in a day. Chances are, you're just as busy as me.

But regardless, I didn't want to let the week go by without posting about my 4th marathon this Sunday. Well that, plus the fact that I'm sliding into race-obsession mode, so focus is a tad hard to come by at present.

Training in a nutshell:
For several months, I'…
Read more
More posts