Showing posts from August, 2009
Show all

Wholefoods CEO Is An Idiot, But So What?

August 27, 2009
Those who follow diabetes dust-ups intently (I'm not one of them) have been pointing out an Op-Ed piece by Wholefoods CEO John Mackey in which he said, "Most of the diseases that kill us and account for about 70% of all health-care spending—heart disease, cancer, stroke, diabetes and obesity—are mostly preventable through proper diet, exercise, not smoking, minimal alcohol consumption and other healthy lifestyle choices." Reaction from the diabetic community has been predictably unfavorable , particularly from the Type 1 diabetic crowd, where we are the lottery "winners" of an autoimmune disorder and have no ability to prevent anything. I've found that diabetics don't like getting blamed for the disease and there's no reason we should, since there's nothing that would've prevented it. And while it's true that stupid editorials from guys like Mackey don't help the public understanding of the disease, here's the thing: it will ha
Read more

If It's Good Enough for Lance...

August 25, 2009
After last Sunday's 22 miler, I'm now in taper mode, which could also be described as "voodoo" mode for me. Over the next 20 days, I'll be taking every supplement I come across that offers promises of enhanced performance (not THAT kind - I've got enough spam about THAT), but the kind that might help me shave exactly three minutes off my marathon PR so I can get to Boston. One of the substances I'd been curious about is FRS , which I first learned about when I clicked on a banner ad with Lance Armstrong a few months ago. Think of that: I don't click on many banner ads, but Lance Armstrong's face was enough to make me curious enough to stretch my mouse a few pixels and click. While the website was interesting and believable, the fact is that at $2.50/serving, it ain't cheap. The market for something to believe in might be infinite, but my budget isn't. But over the weekend, three things happened: 1.) I stumbled across this article in Men
Read more

August 19, 2009
About a month ago, I started The Cayenne Pepper Experiment. In an earlier post, I discussed how one of the things that hasn't gone well with this particular marathon season is that I'm 4 pounds heavier than I was last season and 8 pounds heavier than I was 2 years ago when I had a 3:18 PR. While this still puts me at an "ideal" BMI, it doesn't take a rocket scientist to know that carrying extra weight around during a marathon isn't ideal for PR's. At the same time, my diet is mostly-somewhat-reasonably healthy, so outright "dieting" when I was running 50 miles a week didn't seem to make sense. However, I remembered that when I went on my insulin pump eight years ago, the more efficient use of insulin changed my total daily dose from 60 units to roughly 42. When I did that, I lost 15 pounds without changing anything. This caused me to conclude that if I could lower my average insulin dosage further, maybe those 4 pounds would just slide aw
Read more

August 14, 2009
After 62 days of wearing the Dexcom, my A1C is either 6.2 or 5.8, depending on which chart you believe. According to both the Dex and my labs, my average blood sugar for the period was 131. (More on this in a minute.) According to this chart , that converts to a 5.8. According to my lab paperwork, however, that's a 6.2. I don't know why that is, and I also know that 6.2 is good - in fact probably the best A1C I've had in 25 years with diabetes. But dammit, I expected a 5.8, so something that starts with a 6 kind of bugs me. That being said, my Doc seemed a little worried that my actual blood tests per day had dropped from 4-5 to 2-3 and that I was trusting the Dex so much. But I'd say if the Dex says my average blood sugar is 131 and so did the labs, I think it's reliable enough. I also talked to the doc a little bit about trying Apidra. When I look at my Dex wave, my meals have a habit of taking me quite high (220-250) and then it's a good 2.5 hours 't
Read more 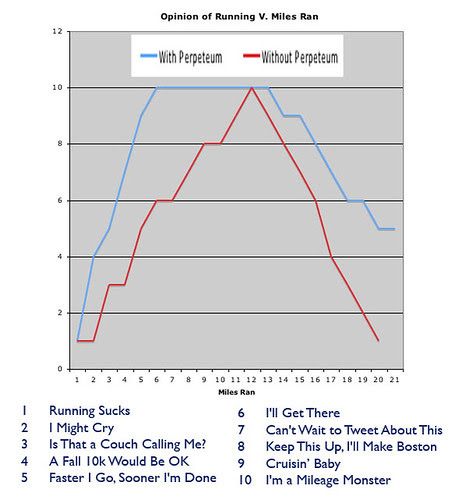 I've done a lot of things different on this marathon plan, but one of the most important has been switching from a wide variety of less expensive fueling systems to Hammer Nutrition . Hammer had first been recommended to me by a local Ironman athlete who joined me for a few long runs last year. At the time, it was too late in my training to risk adding something new to the mix, but I've been using HEED and Hammer Gel for several months now. (Side note: My Ironman friend told the about reading that Hammer was formulated well for diabetics. I found it a little strange that a non-diabetic would know this until I became a Hammer customer. Simply put, Hammer sends copious amount to education to their customers. While the material is always marketing their products, there's gobs of research and education in the newsletters. Impressive stuff.) Until this past weekend, though, I'd never tried Perpeteum , which is the specific Hammer product for events greater than two hour
1 comment
Read more

What Non-Runners Know About the Boston Marathon 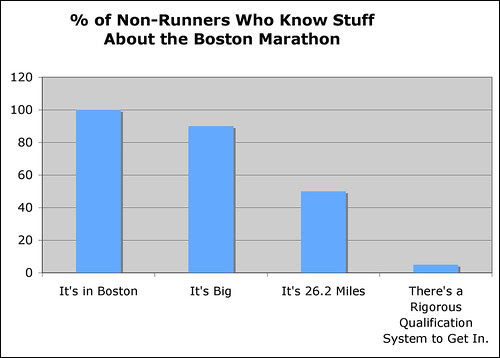 Let's face it: this obsession with Boston is something only runners understand. To most of the non-running community, saying you're running the Boston marathon doesn't mean much. Half the time, you'll get the, "Oh a marathon.. how far is this one?" But very few people outside of us idiots know what it takes to get there . Even so, I wonder about the standards a lot. For me, I love them: they were made for a guy like me who on a good day, with a good plan and a good tail wind might get there. Yet at the same time, I read a lot of running blogs. Some of the writers ( these two come to mind) would be embarrassed if all they could say was that they qualified for Boston. These guys don't get out of bed for anything slower than a 2:50. A slothly 3:15 would be a tremendous failure in their world. And that's not a bad thing: it's just how their world is. Meanwhile, guys like Steve Walker are the epitome of the word "runner," yet - and I th
3 comments
Read more 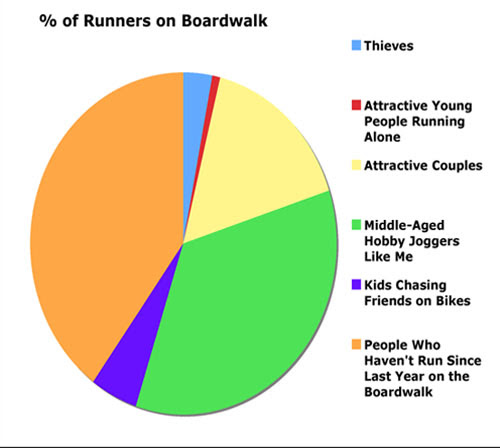 While at the beach last week, I enjoyed 4 of my 5 runs on the boardwalk. I use the word "enjoy" somewhat loosely, though I was certainly entertained. To the buff guy who raced me for a mile at 6:30 pace, only to suddenly stop and call it a day while I still had 3 miles left, I say, thanks for the company. To the kid on the bike who drove like he needed a breathalyzer test, I say move it over. And to the girl who ran every day in a bikini and loafers, I wonder: were you Jenn Shelton ? I'm pretty sure you were but couldn't think of a way to ask without sounding creepy.
3 comments
Read more

Summer vacation 2009 is history. As is typical, I spent the time either drinking more expensive beer than usual, consuming gut-busting amounts of seafood, assuring my children that despite what shark week says, the surf is safe... or running. The day after arriving in Ocean City, I went for what was supposed to be my first 20 miler of the marathon season (which has 3 total). This was basically the course I had in mind . While the course was 19.25, I knew some places I could pick up the difference. In the end, though, I cut it at 19.6 because I was whooped. Other notes: 1) If you wish to copy this course, be forewarned you're not supposed to run on the Route 90 bridge. There is a decent sized lane, but you're not supposed to do it. Also, if a car were to swerve, your only move is to vault over the railing into the bay. 2) Fortunately, there's not a ton of traffic when I went over it at 7:30 AM. 3) If you want to get off Route 90 onto Ocean Parkway, keep in mind, this isn
1 comment
Read more
More posts