Showing posts from July, 2006
Show all

July 28, 2006
Sometimes businesses need to decide if they have a company or a hobby on their hands. I'm starting to feel that way about Zookoda. I blogged about Zookoda several months back. They have a wicked slick interface and a nice system for sending out blog-based news. Most of the time, it works great. A few weeks into it, I was having a rather simple problem and complained about it. When they finally responded to my complaint - three days later - their tone was basically, "Hey, this is beta and it's free - what are you complaining about?" I send a few different newsletters every Friday and for the second time in four weeks, my newsletters didn't go out this Friday. Or rather, according to the Zookoda system, they were sent, but not delivered. Last time this happened, they ended up getting delivered about 14 hours later. Let's make this simple: if your business is one that delivers e-mails, you better deliver the e-mails. Whether you're in beta. Whether you&#
2 comments
Read more

July 25, 2006
Just because the competition is doing it, is not necessarily a reason for you to do it.
Post a Comment
Read more

July 25, 2006
One-third of high school graduates never read another book for the rest of their lives. … 58% of the US adult population never reads another book after high school. 42% of college graduates never read another book.80% of US families did not buy or read a book last year. 70% of US adults have not been in a bookstore in the last five years. 57% of new books are not read to completion. Most readers do not get past page 18 in a book they have purchased. Customers 55 and older account for more than one-third of all books bought. Number of publishers1947: 357 publishers 1973: 3,000 publishers 1980: 12,000 Publishers. The New York Times, February 23, 1981. 1994: 52,847 publishers. Books in Print.2003: About 73,000 (plus those who publish through POD/DotCom publishers; they use the publisher’s ISBN block.) 78% of the titles published come from the small/self-publishers. Most initial print runs are 5,000 copies. A larger publisher must sell 10,000 books to break even. A book must move in the st
Post a Comment
Read more 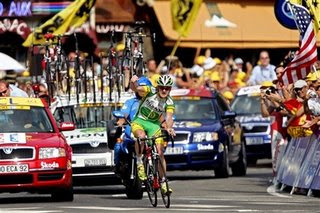 History was made today, as Lancaster County's Floyd Landis recorded one of the greatest stage wins in Tour de France history. You can read about it here . Yesterday in the Alps, Floyd got crushed, falling from first to eleventh place. Most people said the Tour was over for him. But those close to him said that Floyd was doing OK . I guess they were right! Floyd goes into Saturday's time trial in 3rd place. Right here, right now, I'm predicting that the next winner of the Tour comes from Lancaster County, PA! Go Floyd!
Post a Comment
Read more

July 20, 2006
Marketing guru Seth Godin says that "the most successful marketers tell two stories at the same time. A shiny one and a deep one. The shiny story is easy to notice, easy to enjoy, easy to spread. The deep story is fascinating, worth your time. It has texture and mystery and it lasts." Peter Leach is a good friend of mine. He's also technically a client of mine, though I think over the years I've bartered as much as I've bought or sold with or to him. Peter's a great photographer and had an idea for in-action pictures of your student athletes, printed on durable automotive magnets. I think it's a great idea and you can see the tiny website I put up for him here . So the "shiny" story for Sportscarz is the fact that you get a magnet for your car with a picture of your kid on it. That's cool and we think it'll make people at least inquire. The "deep" story, though, is that Peter's been a professional photographer for m
Post a Comment
Read more

July 20, 2006
A great article on youths, sports and coaching: The only measure of success for a coach is if the kids come back to play the next year. If they don’t return for a second season, you weren’t a good enough coach, period.
Post a Comment
Read more

Is Senator Santorum Breaking the Law?

July 13, 2006
I think he may be. This email was in my in-bin this morning: Dear Mr. Grimm: Having personally witnessed the devastation from flooding in central Pennsylvania in the past week, I am writing to make you aware of federal assistance that you may be eligible for. As you may know, President Bush issued a disaster declaration for numerous Pennsylvania counties. This declaration allows eligible individuals in these counties to apply for federal disaster assistance. If you have been affected by recent floods, I urge you to contact the Federal Emergency Management Agency (FEMA) as soon as possible to apply for possible relief. FEMA can be contacted at (800) 621-FEMA or www.FEMA.gov and the Pennsylvania Emergency Management Agency (PEMA) can be reached at www.pema.state.pa.us/paflooding. If you own or operate a small business, you may be eligible for relief from the Small Business Administration (SBA). The SBA can provide low-interest loans for business repairs or replacement costs to eligibl
Post a Comment
Read more

July 13, 2006
A new service just launched called ClickTale which records how people move about your website. I think this is a great idea. My recent corporate redesign was done in such a way that I can tell you exactly how I intend for people to move through the site and this service lets you see if your intentions are being met. I've already signed up to be on the beta list and hope I get in.
1 comment
Read more

July 13, 2006
I read a review this week that said that Microsoft has nailed RSS, meaning that when people upgrade to Office 2007, they'll finally "get it." If you'd like to get it sooner, click here to get a non-technical explanation of RSS.
Post a Comment
Read more

Got My Hugh On

July 10, 2006
I'm a big fan of Gaping Void , and was thrilled to add the "widget" to my side bar, which posts Hugh's new cartoons as he draws them. I would've done it sooner, but only today realized that Hugh had a "no adult language" option. Because while some of Hugh's more mature content really cracks me up, I like the fact that my blog has a work-safe appeal.
1 comment
Read more 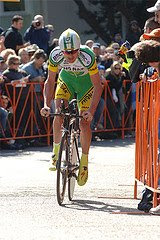 In my opinion, perhaps the most underestimated sporting event is the Tour de France , which is underway all this month. What is it? Basically, it's 22 one-hundred mile bicycle races, taking place during 23 days over the highest mountains of France. I always pay a little attention to the Tour, but this year I'm keeping a closer watch. Why? Because Lancaster County's own Floyd Landis is one of the favorites. Whoda thunk it? Keeping in mind that this blog tries to be about the intersection of marketing and technology, here's an interesting article that explains how - in some ways - the bikes the pros ride are crappier than ones you and I could buy (assuming you have $5,000 burning a hole in your pocket).
Post a Comment
Read more
More posts